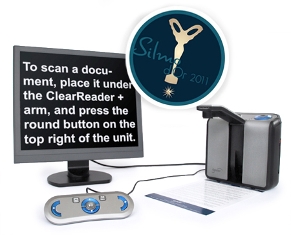 Created in 1994, the award of the Silmo exhibition in Paris, France is a innovation and quality control mark which rewards the intrinsic values for innovation, technology and creativity in the field of ophthalmology. This year, the Optelec ClearReader+ won the first prize in the category Low Vision/Optical Instrument. The prize rewards "the creativity and inventive spirit" of the ClearReader+.

Optelec would like to thank their French distributor CECIAA for their efforts in making this happen.

For almost six decades, the international IF design award has been one of the most important awards for innovative product design, recognising outstanding achievement in design. Among the criteria to win this award: degree of innovation, ergonomics and design quality. The official design awards night was held on 10th February 2012, in Munich.

The Optelec ClearReader+ was launched in the UK at the Birmingham Sight Village exhibition in July 2010 and is now available with the additional Feature Pack for the benefit of those wishing to scan and archive reading materials and to read in magnification and high contrast as if the original content were in large print.

Optelec products have been recognised at numerous awards.  Independent Living Design Awards have been presented to Optelec in 2006 for the Compact+, and in 2003 for the Traveller+ portable video magnifier and the ClearView desktop video magnifier in 2000.